Dissecting the Controversy of Volunteer Projects for Asylum Seekers

Recently the Daily Mail online published a Reuters article, “Good job or taking work? Volunteering by asylum seekers in Italy praised and panned.”  It provides an interesting outline of the pros and cons of an initiative in Italy which offers migrants from sub-Saharan Africa—living in temporary reception centers—the option of spending some time doing community service work such as litter clean up, both to pass time productively and to “give back” to the communities which have taken them in. The article is a very balanced piece putting forward opposing views, summarized as “Frustrated at long waits while asylum applications are handled, many migrants have been more than happy to get involved in volunteer work but this has irked some critics who see it as either exploiting migrant labour or taking jobs from Italians.”

The controversy is real and all sides have valid points, so we thought we’d explore it all in this issue’s Points of View. Before you continue here, we encourage you take a few minutes to read the original article,

The article raises lots of ethical and practical issues we could discuss, but we will focus on just four of them. We hope you will add your thoughts in the Comments section at the end.

Issue 1: Is it right that migrants should be encouraged to volunteer when they are legally barred from paid work? And, if they can’t do paid work, isn’t this better than doing nothing? 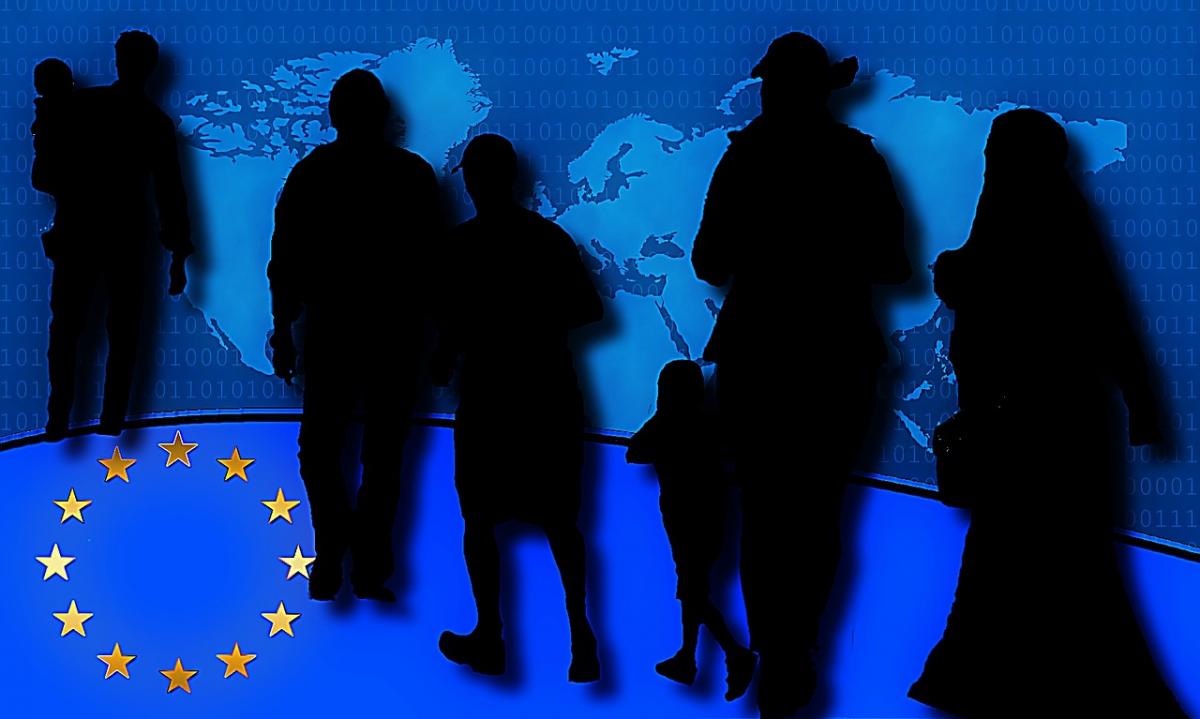 The article makes it clear that these migrants are legally barred from doing paid work in Italy, although the government provides Italian lessons and some job training. That isn’t an unusual situation. As a general rule, asylum seekers are also not allowed to hold a job in the UK or the USA while their applications are being processed. When it comes to volunteering though, rules differ. For example, as outlined in the booklet, “A Right to Volunteer:  Giving asylum seekers the opportunity to give back to their communities,” asylum seekers are legally allowed to volunteer in the UK, even if current government guidelines are preventing many of them from doing so.

All of this raises two opposing questions:

Issue 2: Is the volunteer work offered to the asylum seekers beneficial to them as well as to the community? Why only permit them to volunteer in government projects when there are NGOs which may be interested in hosting them, too?

The article notes that “the Italian government has encouraged local authorities to find ways to involve migrants in volunteer projects to sow good will in communities where they are housed and to help their integration.” This is a well-intentioned goal, but immigration law researcher Gianfranco Schiavone also wants such community service to be an enriching experience that aids migrants' integration into Italian society. "If a bus picks them up, takes them to a place to pick up trash and then brings them back without interaction with other people, that is fake community service." Indeed, the reporter observed the volunteers collecting trash as only talking with each other.

Interaction with other people is key for immigrant integration, as made clear in the 2006 report from the European Volunteer Centre (CEV), “Involve: Involvement of third country nationals in volunteering as a means of better integration” (not available online). The report encouraged governments and other actors to ensure migrant volunteering didn’t just build social capital within migrant communities but also across communities, an effort called bridging social capital. This would ensure migrants settle into and integrate with host countries, learning language skills, making connections and friends, and more.

CEV’s report explicitly recommended that “governments should help create an enabling environment both for volunteering in general and for migrants to get involved in volunteering. The best initiatives start bottom-up but need a framework in which to emerge." Are the Italian service schemes failing at this?

We are equally concerned that all of the volunteer projects offered seem to require nothing more than manual labor. This feeds the stereotype of low-level work and translates into participation mainly by able-bodied men. Aren’t the goals of fighting boredom and achieving integration equally important for women, children, and people who are not physically strong? Further, why assume that no migrant has skills and talents useful to Italian society in other ways?

Researcher Schiavone also questions why migrants are asked to volunteer only for public works projects when they could just as well volunteer with established non-profit organizations.

He raises a good point. Does this indicate an exploitative intent behind the scheme, “saving money” on services usually funded by taxpayers? Whether such exploitation is an intentional or coincidental outcome, it deserves examination. Assuming that non-profit organizations in Italy are also working for the good of the community, would they not also value and benefit from the contribution of migrant volunteers?

Of course, it’s never as easy as that. We suspect that if the Italian government had explicitly directed migrants to volunteer only with non-profits, there would be different push back. Undoubtedly, those same non-profits would have complained that they were being expected to fill in the gap of inadequate planning for immigrants!

Not surprisingly, there is resistance from labor unions and other employment advocates:

Not everyone has welcomed such schemes in a country with one of Europe's highest youth unemployment rates, nudging 40 percent. Some immigrant advocates and union officials have criticised the push for community service by migrants as a potentially exploitative labour practice and suggested it could even violate international norms on requests for asylum.

The numbers taking part right now (less than 200 in Italy) are not even the tip of the iceberg in terms of the 600,000 people who are estimated to have crossed the Mediterranean to Italy so far. Nevertheless, proponents of volunteering by migrants want to expand the participation and so the question of job replacement must be addressed and explained.

First, let us acknowledge that it is the job of labor unions to take an “employees first” approach to any idea and to be protectionist against programs that might do anything that affects workers negatively. We have already noted the potential for exploitation of the migrants themselves and want it to be avoided. If there is any intent to eliminate paying jobs in favor of unpaid workers, this should be strongly protested as well.

As with all union/employer debates, worst-case scenarios tend to surface. For the most part, these fears are not based on fact. We note that the same arguments have been put forth whenever organizations begin any volunteer project. That’s because, fundamentally, many people simply don’t believe in volunteering: “If it is work that has to be done, it should be a paid job.” A few major exceptions are volunteers turning up after natural disasters to rescue victims and clean up and, maybe, giving Christmas gifts to orphans.

The major factor that few people recognize is how hard and expensive it is to get ongoing work done with volunteers! Volunteers, almost by definition, work part-time, often only a few hours a week. If tasks need to be completed every day, every week, that would mean recruiting, training, and supervising hundreds of volunteers. Who is going to do that, what resources will they need (e.g., scheduling software), and what will they be paid? So one of the reasons why paying jobs will not go away is that they are the only way to assure full-time coverage of necessary production.

Unions, and often taxpayers, too, don’t like volunteers taking action on unmet needs. They reject the notion that passion for a cause or genuine concern for the people involved could motivate some to roll up their sleeves and just do what needs to be done. Yet that is exactly what the history of volunteering demonstrates. For all the moaning over job substitution, the facts are that once volunteers prove the value of a program or activity, eventually funds are raised (or taxed) to hire people to move the effort forward. Again, this is because most work needs many hours of consistent attention.

Whether they have dreamed forever of coming to the new country or unwillingly fled their homelands to escape war or famine, migrants all share the same hope for the future: to do well for themselves and their families. They actually want well-paying jobs and do not think of volunteering as an answer, but as a means to their goals.

It is important to create policies, guidelines and boundaries so that there is no exploitation or excess expectations. If a migrant is expected to volunteer for 40 hours a week, it’s servitude, not community service.

Issue 4: If they want to volunteer, why shouldn’t they be allowed to?

Regardless of whether some people see volunteering, by asylum seekers or anyone else, as ethically questionable, the last issue we want to discuss is that of choice. Do we see volunteering as a fundamental right in a democratic society? Does the individual truly want to participate in the volunteer activity and, if so, why should they not?

The migrants in the Italian project clearly take part enthusiastically:

Despite the heat and lack of pay, the volunteers welcomed the activity as a break from the relentless waiting for word on their asylum requests, a process that can take more than a year. Frustrated at long waits while asylum applications are handled, many migrants have been more than happy to get involved in volunteer work.

Activity usually wins over boredom, but all the benefits of volunteering accrue: feeling part of a group, some fun, knowing that the work is truly useful, wanting to give back to a community, and more. And if the assignments then move beyond unskilled labor, the potential of learning the language, assimilating the culture, and gaining new job skills can also be strong motivators to participate.

Most asylum seekers feel powerless—and usually are. They are buffered about by enemies and friends, unsure of where they will live or if they will eat, worried about vulnerable family members, and understandably unhappy. Volunteering can be a temporary antidote because it permits the time donor to feel useful, build self-esteem, and accomplish tasks that help others. This is why we so strongly hope that a greater variety of volunteer activities can be offered to a wide range of migrants.

All of this happens when the prospective volunteer is truly free to say yes or no. Unfortunately, the article also raises a red flag, reporting that a government official “suggested earlier this year making community service a mandatory requirement for asylum seekers.” To which we say: No! No!

We think such a move would be foolish. First, it would reinforce the suspicions that the schemes are a way to engage migrant labor on the cheap to deliver essential public services. But more important, removing the voluntary nature of the initiatives would surely lead to resentment from the participants. Migrants forced to “volunteer” for Italian society would more than likely fulfill their tasks less well and, significantly, the approach would hamper integration efforts and benefits.

What Do You Think?

We genuinely want to know your opinions on these types of programs. By examining the Italian experiment with asylum seekers, it may help you to articulate your position on other more common examples of volunteering offered as a means to an end. For instance: Are the arguments relevant to students doing community service for academic credit? To court-ordered alternative sentencing?

There is even a connection to how we handle disaster response. Right now there are thousands of people rebuilding their lives after hurricanes and earthquakes. Do we treat these people solely as victims requiring services from others? When should we welcome them to pitch in and help others as well as themselves? We are fond of saying that volunteering benefits the giver as well as the recipient. The most powerful form of volunteering is reciprocal: when we can no longer tell which one is in need.